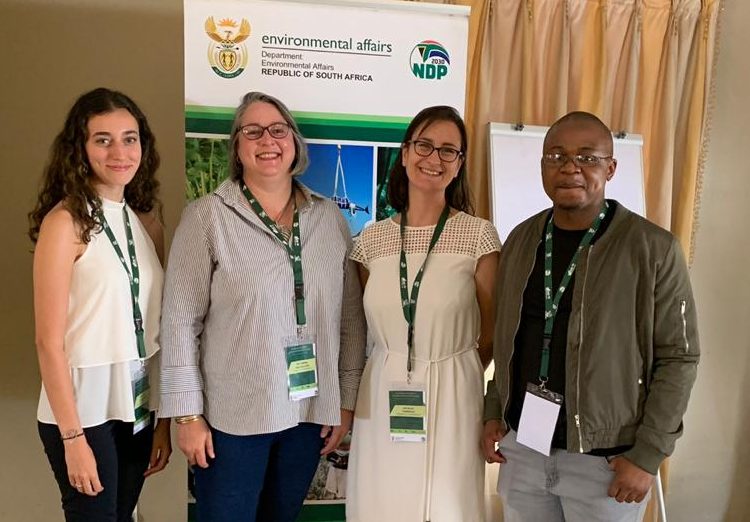 The fourth annual Biodiversity Research and Evidence Indaba was held on 16-17 September in Pretoria, and welcomed participants who were scientists, policy-makers, and global partners. As an intern at the Africa Centre for Evidence (ACE), it was my second week in the office and I was excited about participating in the event. With my background in health and experience in evidence synthesis, I was curious about what the Indaba would achieve.

The event was kicked off by Ms Wadzi Mandivenyi making everyone feel comfortable and setting the scene for an engaging conversation about biodiversity research and policy. The atmosphere of the room felt very friendly after the initial ice breaker activity. This year’s Indaba focussed on land degradation. “We are meeting at a time where the threat for losing more and more of our land and biodiversity are at a high. We are at a tipping point, climate change is having an effect on biodiversity. Africa is in a better state than the rest of the developing world, but we still have space to make changes for the better,” said Mandivenyi. The Indaba saw presentations by scientists, policy-makers, and everyone in between who were all connected by the passion to use evidence to preserve the natural resources in South Africa. Below, I share some of the discussions and presentations that stood out for me over the two days.

Dr. Tony Knowles presented the Intergovernmental Panel on Climate Change report on climate change and land which has 107 authors from 52 countries and took two and a half years to produce. The key message from the report was the need for coordinated action to tackle climate change to simultaneously help improve agriculture, nutrition, and help to end hunger.

While better land management can play a huge part in our response to climate change and the prevalence of the poor living in dryland areas, land management alone will not fix the challenges. In  the South African context, there is a clear need to improve data on the extent, type and intensity of land degradation to support resources; better understand the effectiveness and cost of response measures; understand drivers and the influence of supply chains and market choices; and finally understand the governance of our landscapes and who is managing which areas.

Following this discussion, Dr. Luthando Dziba presented an IPBES assessment report on biodiversity and ecosystem services for Africa developed by 143 experts from 31 countries. Key findings from their report were that Africa’s natural assets are very unique: we are the only continent with large populations or megaherbivores mostly intact. The implication of this is that Africa’s natural richness and its wealth of indigenous and local knowledge should be used as an asset for sustainable development. “The richness of our biodiversity is underestimated,” argued Dziba, “because only a few studies assess the value of nature’s contribution to human well-being”. One such study that does assess is McKinnon et al’s 2016 systematic review of the evidence from developing countries which seems a starting point to Dziba who commented that “knowledge and data gaps must be filled”.

Another fascinating discussion was given by Professor Eureta Rosenberg who spoke about the surprising social causes of land degradation and research priorities in mining. She commented that “we are very good at changing ecosystems sometimes for the worse but we are very bad at changing social systems for the better of our ecosystems”. Her project sought to explore the 6000 abandoned and derelict mines in South Africa in 2016 to understand why these areas were being abandoned. By South African law, mine areas need to show that they have the funds to rehabilitate the mine before getting permission for mining to begin. Despite this, in the last 20 years, no mine has been closed down and as such, mine areas have not been restored or rehabilitated. Rosenberg explained the massive potential that restoration held for creating more jobs, more sustainable livelihoods, and improved water security. She argued that there is sufficient capital but limited research on the issue and slow change in policy. Espousing the Indaba and formats like it as highly useful to address a challenge like the lack of restoration of mining land, Rosenberg highlighted the need for more systematic ways of gathering data to feed into restoration programmes.

Speaking specifically about the science-policy interface (or as my hosts at ACE like to say the policy-science interface), Dr Nicholas King made the topic of land degradation really personal for all attendees. “Are we actually solving problems or are we just generating more and more information?”, King asked us in the audience. This articulated a thought I was having throughout the Indaba: presentations on the implementation of programmes were limited. King continued his presentation by making a connection between land degradation and food supply. It struck me how making this personal connection to something in my life made the issue of land degradation more real for me, even as someone from outside of this sector and country. I wondered if others felt the same way, and whether presenting findings in this way would motivate others to take concrete action. King spoke to the difficulty of assessing the effectiveness of environmental policies in the context of the changing environment. He argued that while successful policies have been and can be used as templates in different countries, one of the biggest challenges to overcome in terms of the science-policy interface is how we frame problems like climate change as an environmental issue when in reality, it is an environmental, social, and economic issue.

Following Dr King, my hosts at ACE who form part of the Collaboration for Environmental Evidence South Africa centre – Dr Carina van Rooyen and Likhwa Ncube – presented evidence mapping as a science-policy interface tool. They shared with the audience the mega-map they are currently developing of all South African environmental research, how they are mapping this evidence according to policy priorities with the Department for Environment, Forestry and Fisheries, and the process of co-production with decision-makers they are following. I am not yet working on this project, but will start doing so next month, which is really exciting.

There were Knowledge Cafes hosted after lunch on both days of the Indaba. These were positioned as platforms in which policy-makers and scientists could directly engage about specific topics that related to the presentations given before lunch. On the second day, I attended the cafe on Mechanisms for the policy-science interface and governance. From the conversations that were going on in the room, it was clear there is limited conversation between researchers and decision-makers. Some of the decision-makers from the DEFF were frustrated about the lack of access they have to research, which makes it difficult for them to use evidence in developing policies. One woman said she spent time travelling to the University of Johannesburg to use their library database on campus and it struck me how much effort that involved.

Whether scientist or decision-maker, what stood out for me from the Indaba was the dedication of all who attended to preserving the biodiversity of South Africa, and the willingness to engage with one another to tackle these large environmental problems together. From this health intern’s perspective, evidence-informed decision-making is alive and well in the South African environment sector.