By Mary Opondo, Researcher at the Africa Centre for Evidence

The official launch of the Africa Centre for Evidence (ACE) took place at the University of Johannesburg, on 9th October 2017.  Despite the rain and thunderstorms, the guests strolled in with excitement at what the Centre had to offer with regards to promoting the use of evidence-informed decision-making (EIDM) across Africa. In line with this objective, the set-up of the event was in the form of a tour. The guests were taken on a journey through the five themes ACE is  focused on. At each stand, there were ACE members of staff who provided a five-minute presentation to the guests, elaborating on one of the five themes. 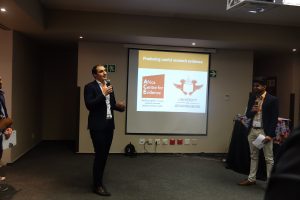 The first theme was on the use of evidence. The presenters were Laurenz Langer and Zafeer Ravat. The presentation was a role play on how researchers and decision-makers view and utilise evidence differently. This presentation also touched on the policy-relevant research methods which ACE specialises in: systematic reviews and evidence maps. The role play was filled with humour and kept the audience entertained throughout, while also enlightening them on differences between systematic reviews and more traditional literature reviews. It particularly focused on how these methods provide a structured, transparent and rigorous methodology for collating evidence while providing an indication of patterns in the evidence base to inform decision-makers’ needs. The presenters ended by noting the importance of working together to promote evidence use. 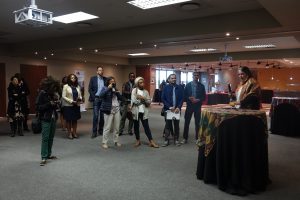 For the second theme Carina Van Rooyen  presented on how ACE is supporting others to use research evidence. She used the entertaining analogy of penguins to illustrate how ACE supports other stakeholders interested in producing useful evidence. Penguins are social birds and usually walk in groups wherever they go. She likened this to ACE’s role towards building and extending the research evidence networks across Africa. This is through training workshops and mentorships, provided nationally and internationally.  These activities are aimed at enhancing researchers’ skills to produce demand-led research evidence accessible to decision-makers, civil society and other stakeholders. Carina went on to say that part of the support also includes carefully listening to the needs of each other and the ability to translate research into policy in decision making.  She finished off the presentation with the phrase we are “penguining at ACE”. This refers to ACE’s goal to work together with others in the production of useful research. 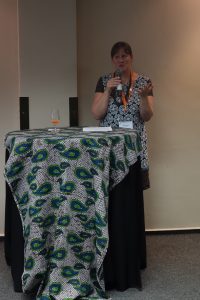 The keynote address was done by the Centre’s Director, Ruth Stewart, at the third theme of the tour. The message in the address was aimed at ensuring that all our work at ACE is fully responsive to the contexts and needs of research producers as well as users in Africa. Ruth started her sharing stories from her own background and using these to explain how ACE came about and its motivation in producing evidence that is both useful and used. In doing so, our Director noted two key challenges researchers face in the evidence production process: reliance on single studies, and working in isolation. Ruth explained how researchers often fall into the trap of relying on the findings of single studies, even when the studies are prone to flaws in the design and may include unsubstantiated claims or bias. As a result, it may ultimately lead to decisions that cause more harm than good in the society. ‘The danger of a single study’ highlights the need to have rigorous and transparent systems to consider a all of the available evidence base, including systematic identification, selection, appraisal and synthesis of research.

The second challenge discussed was the isolation of researchers when trying to produce useful research evidence. This limits their engagement with other researchers, decision-makers and others working on the same issues. Ruth concluded her address by reiterating the need to build partnerships and collaborations to improve the access and use of research evidence to enable change, through increased capacities and expertise in EIDM. 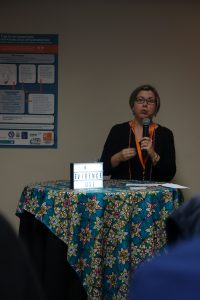 After this keynote address, the tour went on to the fourth stand, where Yvonne Erasmus presented on understanding and increasing capacity to use research evidence. Yvonne shared our various collaborations with decision-makers, touching on the production of demand-led research, where decision-makers set priorities and often also shape the research itself. Yvonne used examples from our UJ-BCURE programme in Malawi and South Africa, where ACE staff delivered training to strengthen the capacities of the public servants in using research evidence. Currently, ACE has an ongoing project on ecosystem services and multi-dimensional poverty where the decision-makers have been actively involved in the research by identifying key areas of interest. She concluded by saying that to produce demand-led evidence, it is imperative to understand the contexts of the research, the various stakeholders and their processes and priorities. 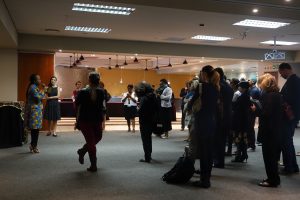 Precious Motha covered ACE’s last theme on supporting evidence communities through local, national, regional and international partnerships. She started off by introducing the Africa Evidence Network (AEN), to which ACE provides the secretariat. She mentioned that the AEN is a community of practice which brings together researchers, decision-makers and other stakeholders involved in the production and use of evidence. The Network promotes learning and development through the use of social media, and a monthly newsletter. These share news across the Network, providing updates on EIDM conferences, publications, training and projects. Our guests were informed of the upcoming Evidence Conference, to be hosted by the AEN at the CSIR International Convention Centre (Pretoria) in September 2018. 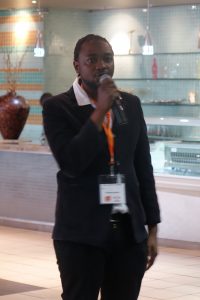 Promise Nduku made the closing remarks for the event, thanking the guests for coming to the launch and reiterating ACE’s commitment to supporting the use of evidence to make Africa a better place. He then invited the guests for cocktails and networking. Overall, the launch was a success: it engaged and took the guests through a journey on how ACE’s purposeful research initiatives contribute to greater outcomes through the increased use of evidence in decision-making. This launch reminded us all that ‘no man is an island’; that relationships and networks are important for promoting capacity, sharing information, and supporting engagement for the use of research evidence.