All about my ACE Experience: My first, but not last, time in South Africa

The Africa Centre for Evidence (ACE) hosted Maiura Muralitharan, a Master of Public Health Student from the McMaster Health Forum, to travel abroad through the Queen Elizabeth Scholarship program. Maiura shares her experience of working with the ACE team and exploring South Africa. 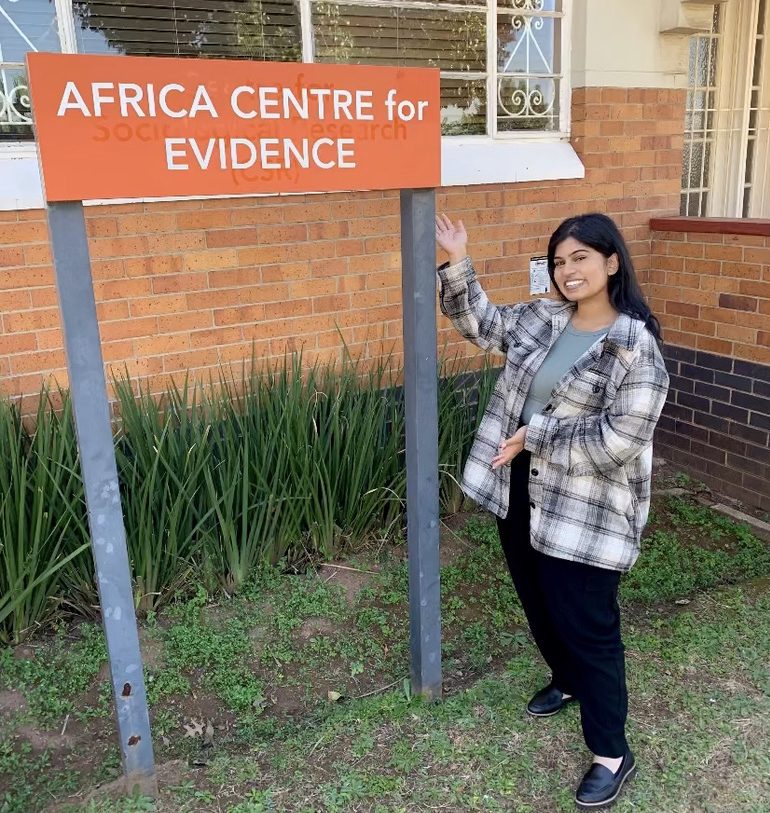 Maiura at the ACE office, University of Johannesburg

When I first landed in Johannesburg, I was pleasantly surprised by the friendly nature of all the strangers I encountered. From the porter who helped me with my boat load of luggage, to the airport cellphone service provider, and my AirBnB host, they were keen to assist me in every way possible with a smile on their face. Soon after, I came to know that South Africans, with a special shout-out to those I worked with at ACE,

they were welcoming, pleasant, and always accommodating – it’s as if we have known each other for quite some time.

I am happy that I was offered, and accepted, the unique opportunity to complete a global internship at ACE and visit South Africa through the Queen Elizabeth Scholarship program. When I started at ACE, I was welcomed by the Director of ACE, Professor Ruth Stewart, Charity, my ACE host, and Shafieqah. I soon met the rest of the ACE team during my first staff meeting. It was great to sit in on a virtual team meeting with an integrated ice breaker so that team members could chat and learn more about each other at each meeting. I later met Dr. Bulelwa Maphela, Professor of Ethics and Economics, and Andile Madonsela, ACE researcher, who I would work with for my internship project, and Kekeletso who I assisted on communications tasks throughout my internship at ACE.

My project was quite a unique one—that is, in a field understudied and often underfunded globally: end-of-life services. I learned that the pipeline from palliative care/end-of-life to funeral services was not well understood in the South African context, as well, there were knowledge and practice gaps in the sector. To better understand the context and nature of end-of-life services in South Africa,

my project was developed around gathering evidence in the sector across the African continent to generate a pilot evidence map. 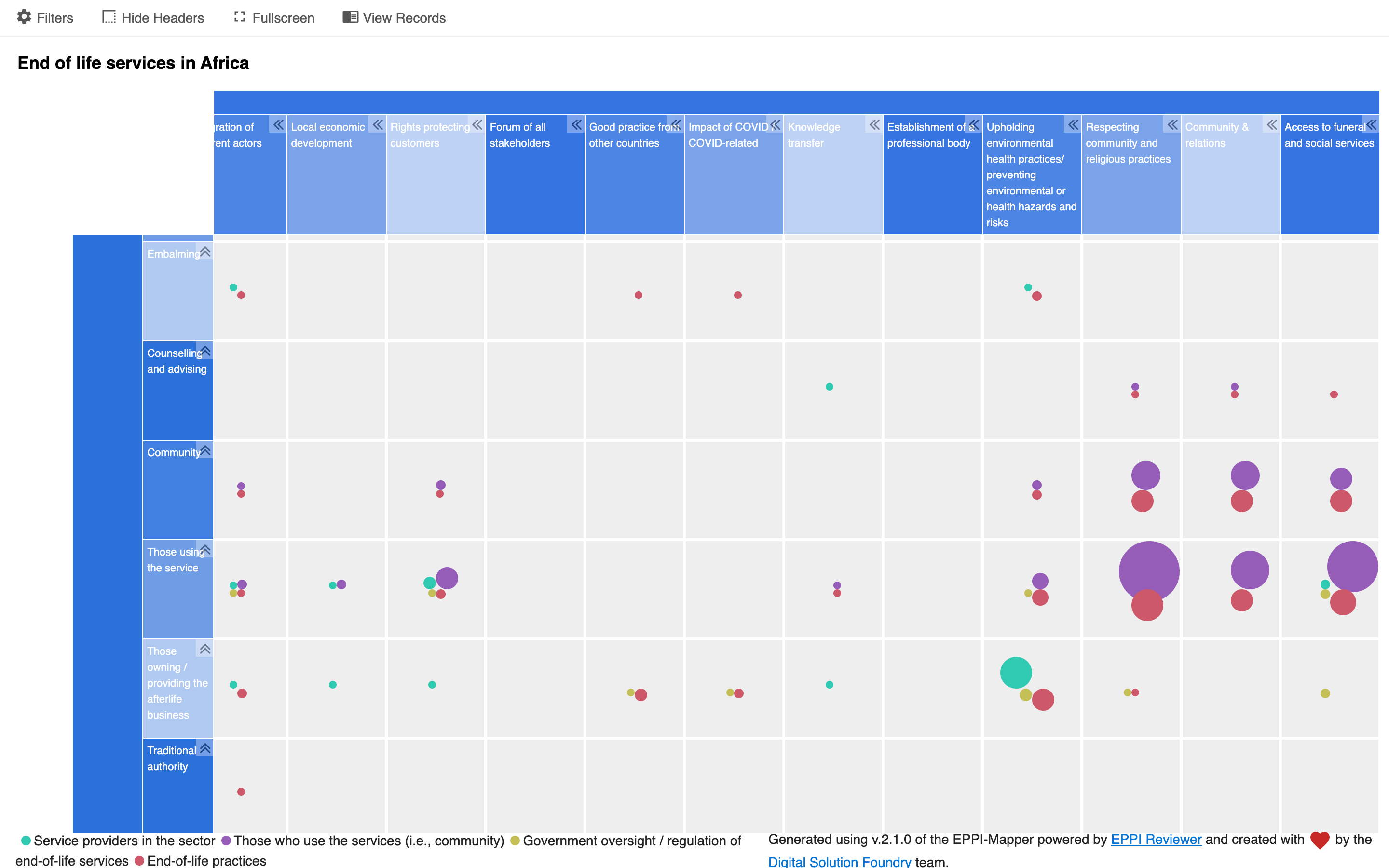 This was the first time I had learned or come across an evidence map, and so learning about this new methodology to visually showcase evidence was intriguing, especially eye-opening as to the broad applications of the final map for policymakers, healthcare providers, regulatory/authoritative bodies, and for use by communities. The first stage of building the evidence map was hosting a stakeholder session. On June 7th, I attended the project’s stakeholder session hosted at ACE with two environmental health practitioners (EHPs) and two funeral directors from Gauteng.

This session was instrumental in understanding the perspectives of these stakeholders with respect to the current state and regulation of end-of-life services, in addition to outlining the key interventions and outcomes desired for end-of-life services in South Africa. I learned about the process of undertaking, the roles and responsibilities of both EHPs and funeral directors, as well as the impact of COVID-19 and resource limitations on the undertaking process and funeral services. It was interesting to learn about how community members, from the public to funeral business owners, are often left out of critical conversations with relation to developing environmental health and funeral policies in South Africa, as well, how evidence in the field that draws from personal experiences is currently lacking.

I had the opportunity to share my experiences and perspectives as a public health graduate student from Canada which opened the dialogue on similarities and differences between our health and social systems and end-of-life care. Engaging with these stakeholders was both inspiring and surprising, as I began to understand the personal and community stakes in the funeral businesses here in South Africa and its townships, as well, the openness to collaborate towards a solution between the stakeholders. The next step of the project was to gather both academic and grey literature on end-of-life services in Africa. We generated inclusion criteria for literature from Africa and any international guidelines/guidance/protocol papers around the interventions and outcomes developed during the stakeholder session. As I have worked on projects with similar search strategies, I drew from my graduate and research experiences to complete the screening process and start to draft a manuscript. That said,

I had not yet worked on a project similar in scope or setting, so this process introduced me to new knowledge that I will carry with me beyond this internship into my career. 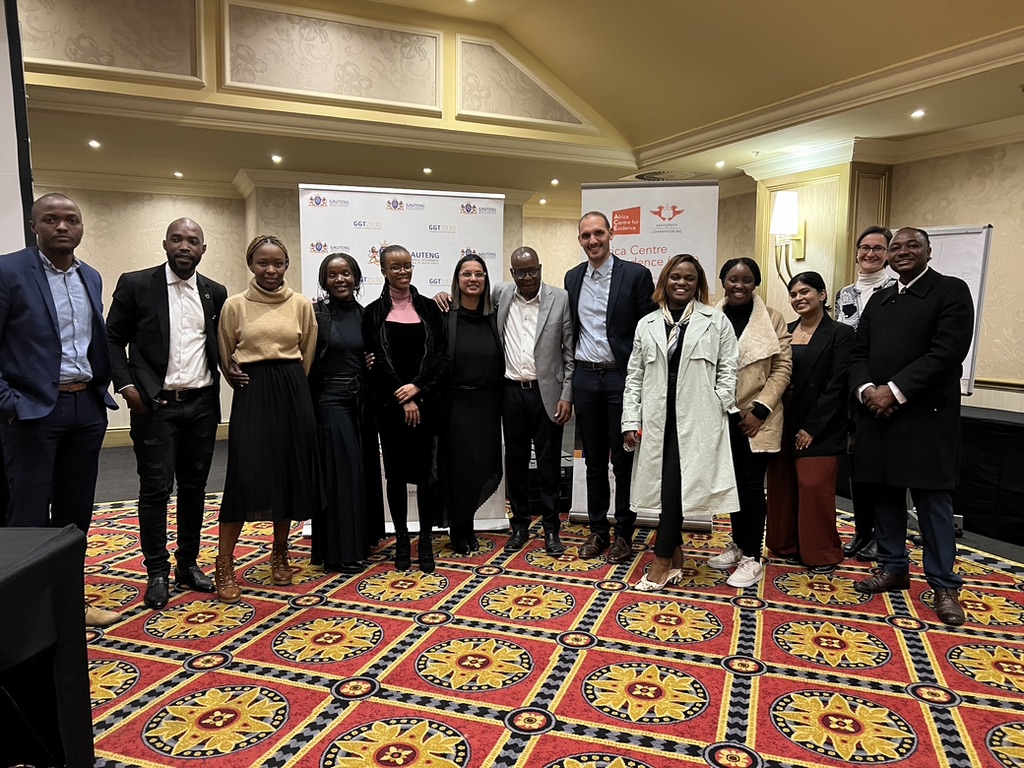 ACE researchers introduced me to the EPPI-Reviewer 4 software through which I screened the articles for inclusion and later completed data extraction. I was not previously familiar with the software and came to really enjoy using it for the purpose of evidence synthesis. The research process yielded numerous academic and grey literature articles, including primary research articles, guidelines on human remains preparation and management at the municipal, provincial, national, and international levels, regulations around death certification, and more.

Personally, this has highlighted how much like research across North America and the UK, South Africa and the rest of Africa lacks evidence relating to end-of-life service regulations and policy implementation, integration of different actors, local economic development, knowledge transfer, and establishment of a professional body for funeral service providers.

Apart from working on this project, I learned more about ACE and their partner the Africa Evidence Network through updating old blog posts and YouTube videos on their respective accounts. I had the opportunity to scope out the nature of poverty research in South Africa to inform a future research project housed at ACE. I was also invited to, and had the pleasure of attending, Growing Gauteng Together (GGT) 2030. ACE researcher Mr. Promise Nduku, alongside his colleagues, launched the policy-relevant evidence matrix (EM) that covered several sectors including education and local economic development. The EM was co-produced by the Gauteng Office of the Premier. Researchers from government and academia, and policymakers came together to discuss how this matrix may be used to inform future policies and research projects. I briefly met the Acting Director-General of the Gauteng Office of the Premier, Mr. Mbada, as well as Ms. Harsha Dayal, Director of Research and Knowledge Management for the Department of Planning, Monitoring and Evaluation.

It was insightful to learn about Gauteng’s developmental priorities and strategies and the importance of evidence in the policymaking sphere. 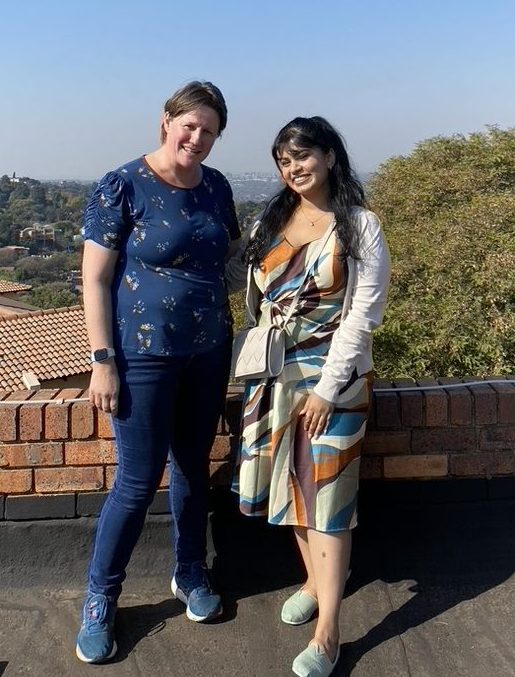 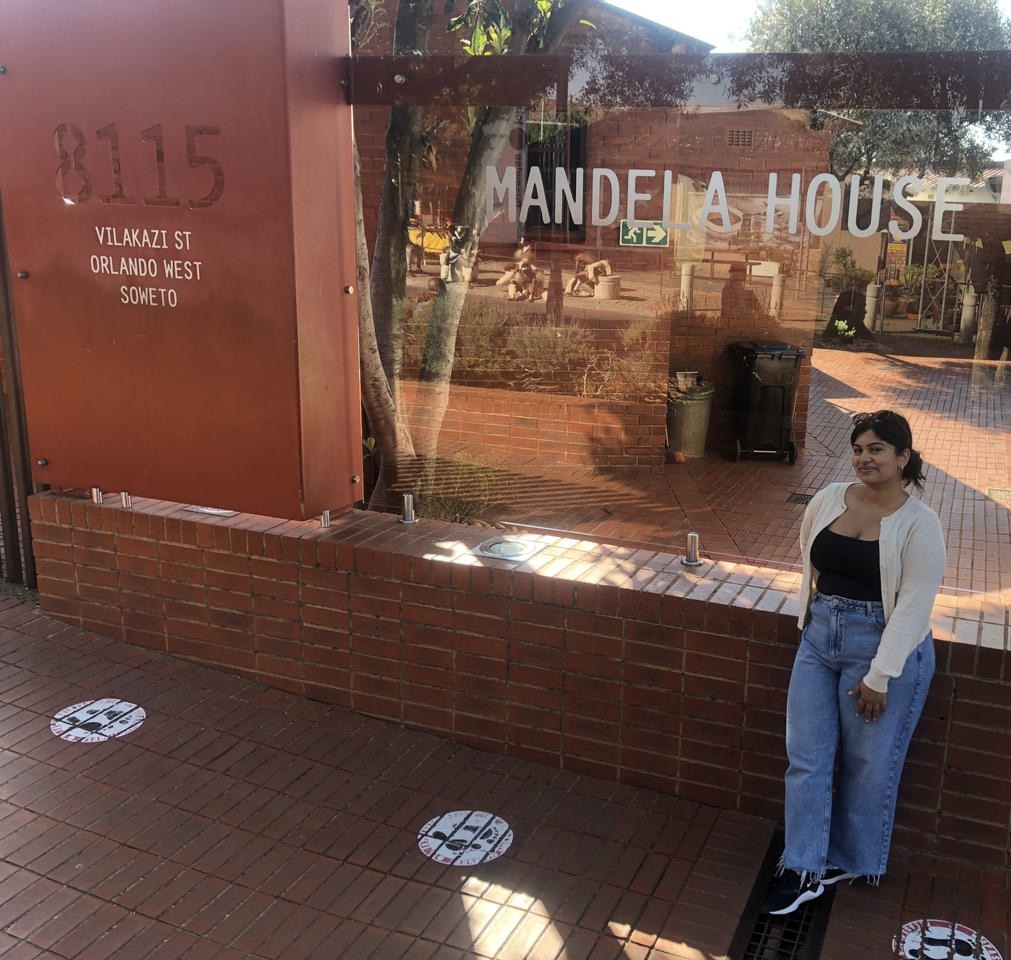 It was also intriguing to learn how challenges faced by researchers and government in Gauteng and South Africa are shared by those back home in Canada—namely, meaningful community engagement for purposeful policymaking that serve community needs. As a graduate student aiming to work in public health and policy, from the conference I will take back the importance of community engagement, evidence synthesis including personal community experiences, as well as co-production and collaboration between academia and government institutions in proposing and implementing effective policies that uplift and empower local communities.

During my time here in South Africa, I also had the privilege of touring some of the country’s historical monuments, as well as its more postcard-worthy destinations. With Mahnoor, the GSO intern from McMaster at ACE, I explored Soweto where we visited Nelson Mandela’s house and the Hector Peterson Memorial. We also visited the Apartheid Museum to get a glimpse of life in South Africa during the apartheid and learn about the country’s sociopolitical history. I am also thankful to have had the chance to tour Johannesburg, Cape Town, the Sterkfontein Caves, and go on safaris to Pilanesberg National Park and Kruger National Park.

Having the chance to explore the country’s rich culture, traditions, landscapes, and cuisine has been immensely fulfilling and I thank ACE for the opportunities and experiences they have awarded me.

My time at the Africa Centre for Evidence and South Africa was insightful, rewarding, and most definitely, an unforgettable one. The people I met inside and outside of ACE have been kind and helpful to me in every way possible. I learned new skills in evidence synthesis and policymaking, as well as, engaged with stakeholders, policymakers, researchers, with a global context. The knowledge and skills I have gained over this internship will undoubtedly serve me well as I return to Canada to finish my master’s degree and begin my career in public health. End-of-life services in South Africa, on the ground as practice and at the regulation level, appears to be heading in a direction where collaboration is welcomed, and the needs of business owners and the community are considered when regulations and policies are in development. Interacting and learning from stakeholders, generating an evidence map from scratch, as well as contributing to the growing field of evidence around end-of-life services has been challenging and simultaneously gratifying. 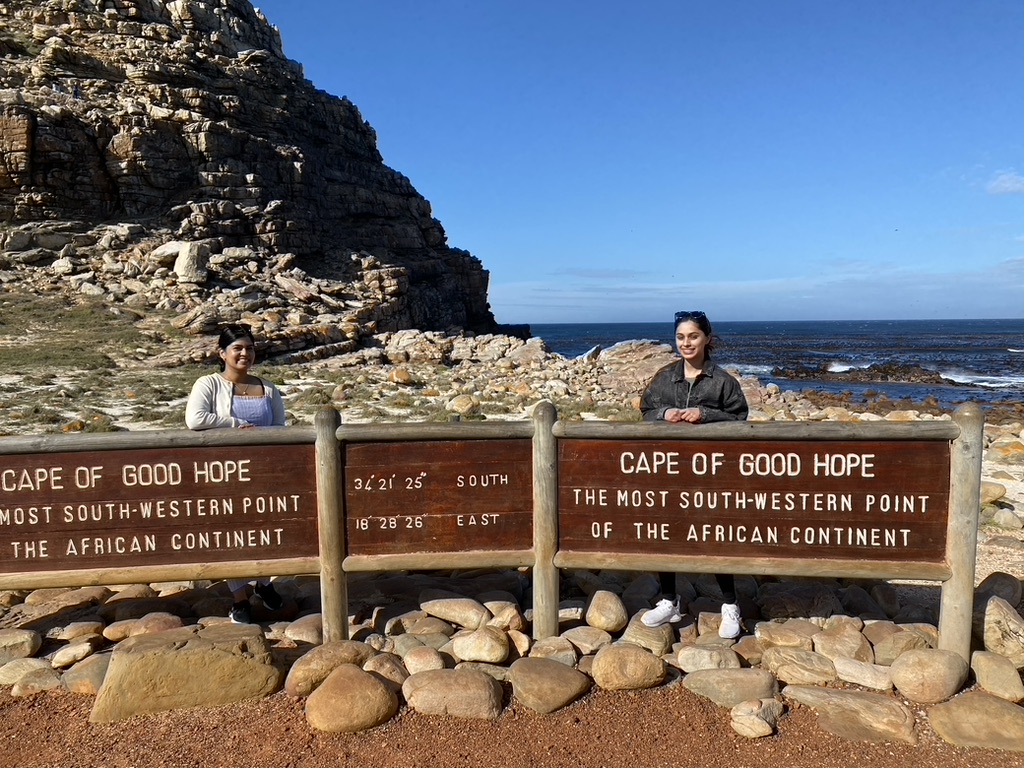 I am grateful to the Queen Elizabeth Scholarship program, the McMaster Health Forum (James McKinlay), the ACE team (Prof. Ruth Stewart, Charity, Andile, Kekeletso, Shafieqah, and all the others), and Dr. Bulelwa Maphela, for organizing this opportunity and for making this internship meaningful to me both personally and professionally. Finally, thank you to all the ACE staff who welcomed me to Johannesburg, checked up on me continuously after my accident, and have made my stay in South Africa as enjoyable as possible!

Though this was my first time in South Africa, it will not be my last­—I hope to return one day to continue exploring the country and all it has to offer.