Blending art and science to build something that lasts

By Aziza Modise, with support from Natalie Tannous

This blog post is part of a series on the history and development of the Africa Centre for Evidence (ACE) that draws on two 2020 research projects. These research projects focus on capturing ACE stakeholders’ perceptions and experiences of ACE’s contribution to evidence-informed decision-making (EIDM). Drawing on interviews among ACE staff (previous and current), members of the Africa Evidence Network (whose Secretariat ACE hosts) (the AEN), and our partners, the stories captured in this series paint a rich picture of ACE’s contribution to the African and South African EIDM space. We aim to publish a new post on the tenth of every month. View the whole series here. 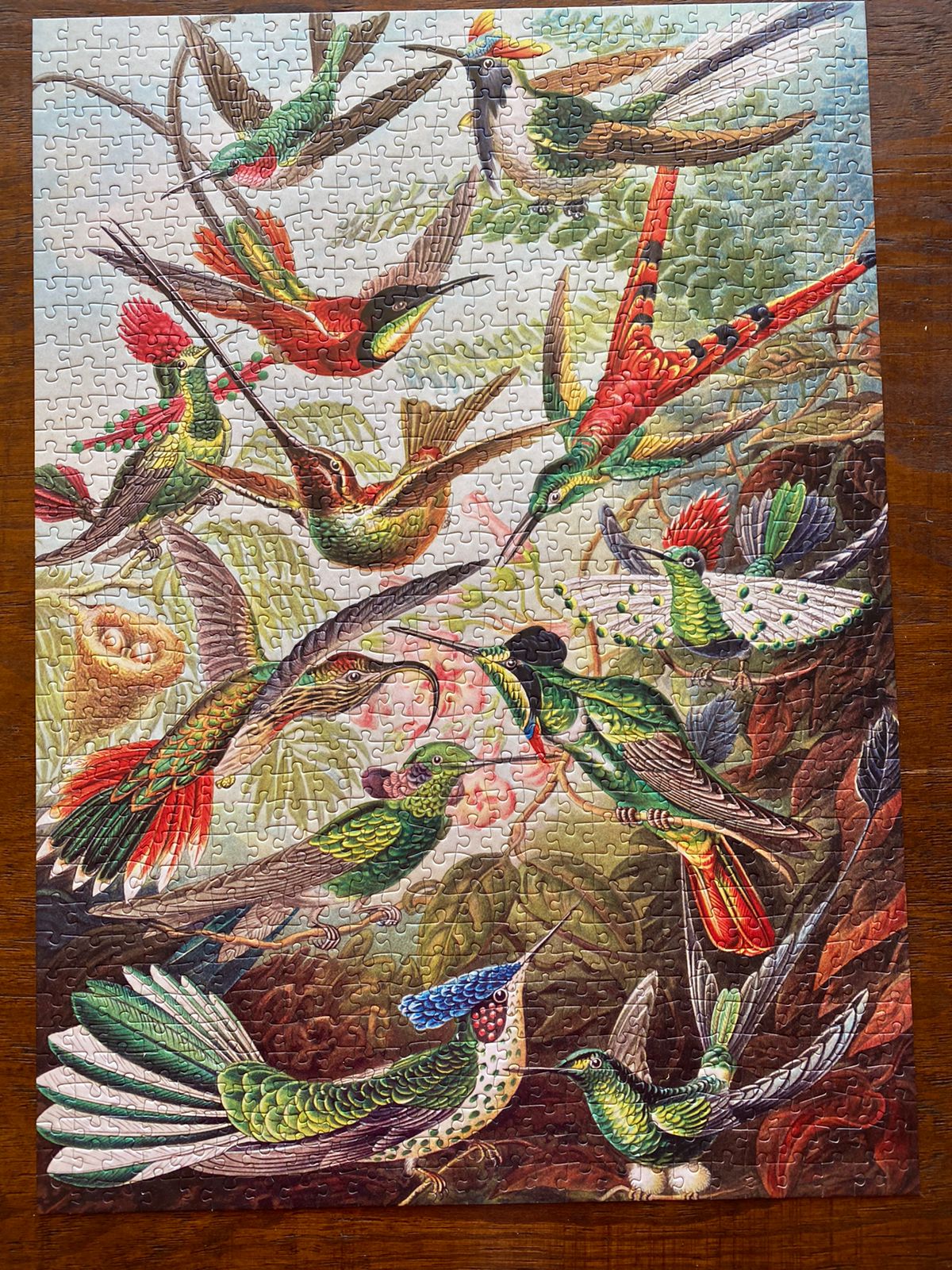 I challenged ACE director, Professor Ruth Stewart to complete this 1000 piece puzzle in time for publishing this blog post. As usual, she rose to the challenge. Well done sisi!

Many moons ago, my mother told me what great and smart animals birds are and how there is great science in building a nest. But living in this fast-paced, no-time-to-look-outside world of a great city, I had forgotten her story until this pandemic forced me to move back to my semi-rural home. Here, we have more trees, more open spaces, and many issues with electricity supply. So I at last have more occasion to sit outside while I wait for my electricity to come back on, giving me plenty of time to observe the intelligent art of nest-building.

It generally takes many tries to build a nest. The first attempt will always be discarded, often at an almost skeletal phase. The second try enjoys more progress than the first, with some material being fetched from the first one, but for a seemingly illogical reason this one too will be discarded. And so it goes on: another one will go through the same process of being advanced  a bit further before being abandoned, and yet another, and another until a complete, beautiful, and perfect nest is finally built. Then of course comes the inspection process by the female madam coming to visit the new house, going in-and-out a couple of times, after which in some instance she decides this is not a great home and the poor bird has to start all over again. Only when both are satisfied is the nest used. Sometimes the family moves in and a few days later they are gone because they saw or experienced something that was unsatisfactory. (I must admit, I have yet to witness madam giving her stamp of approval. I’ve only heard that it can happen from my elderly father). Once, I found a fallen attempt of a complete nest and peered inside. I was surprised to find that it was divided into different spaces, just like we have different rooms.

This is how I see the art and science portfolio at ACE. That is, there is a science of trying to scientifically measure  the most effective ways of supporting people to use evidence when they make decisions. And then there is the art – captured usually in the tacit knowledge of instinct, hindsight experience, intuition, and practice – of testing out and learning together the best ways to support people to use evidence when they need to make decisions. My blog this month will tell the story of how this area of ACE’s work could be said to be the common thread of all our work because it is through this that there is a recognition that effectively supporting evidence-use for decisions involves drawing not only on scientific knowledge of what specific interventions work but also on the tacit and contextual knowledge of how those interventions play out in real-world contexts.

In a recent chat with Ruth through WhatsApp (a monthly meeting that works very well in this way for us because we can go outside), she sits in her garden in Johannesburg with her coffee and I bask in the sun 120 plus kilometres north of her with my tea. I tell her about the nest saga and explain that this is how I see and understand the work ACE does as part of our portfolio on the art and science of evidence-use : one nest containing two distinct areas. She adds another dimension to my understanding by highlighting the fact that you can’t take any bird and transpose them to a particular nest and expect the nest and the bird to fit perfectly. The birds in Ruth’s garden in suburban Johannesburg, taking in cognisance their own resources and situation, would build a different nest from that of my birds in the rural North West province of South Africa. She takes me into ACE’s past to explain how this played out in her work.

Ruth’s first encounter with work that would crystallise into the art and science of evidence-use portfolio was in 2014 at the start of the University of Johannesburg-led Building Capacity to Use Research Evidence (UJ-BCURE) programme. The research team carrying out the programme had the task of doing landscape reviews of the policy-making settings in which the programme was being delivered to understand the evidence landscapes in South Africa and Malawi.

At the time, Ruth shares how the team thought they would find existing reports of relevant research and other information – read ‘science’ – about how the evidence landscape in these countries worked. After all, they were not the first project to work in these countries. They imagined they would find this information all set out and ‘wrapped in a bow’ for them. But, not only was information  about the evidence landscape in these countries disparate, difficult to find, and murky, it didn’t even accurately reflect how the landscape functioned in reality. Ruth and her team found this out the hard way, just like our nest-building birds.

After finding what science they could, the presented their ‘nicely wrapped’ gift to the government colleagues involved in the programme. And the landscape reviews were torn to pieces. They weren’t a reflection of the reality and government colleagues went to town on them: The landscapes were missing informal players, complex relationships were oversimplified, and the dichotomy of evidence producers and users were misleading.

Had it been any other circumstance, the team might have assumed that the method didn’t work, and left the landscape review at that. But they did not assume the method was faulty. They reflected on the work, engaged in open dialogue, and they took on board the feedback from their colleagues in government. Seeing this, government colleagues realised that this team was serious about this relationship and the programme of work. And the result was a real engagement that produced landscape reviews and future work plans that married research evidence with tacit knowledge of the evidence landscape in Malawi and South Africa. This first introduction to incorporating the art of evidence-use with the science on it has become the standard for how we work at ACE. More than that, Ruth continues to advocate for this process of ‘nest-building’ by others seeking to work in this space, saying,

“Since the landscape reviews experience, I always recommend that people must have a go at mapping the landscape and then share it with other people, and be willing to have them say to you ‘it’s all wrong’ because that is a really valuable process in itself. It shows others that you are serious about collaborating, willing to learn from them, and moreover it builds bridges”.

Since 2014 the science behind what actions are effective at supporting evidence-use has grown. This evidence base includes the 2016 Science of Using Science report, co-authored by ACE’s own Dr Laurenz Langer (introduced in earlier blogs). Led by the Evidence for Policy and Practice information and Co-ordination Centre (EPPI-Centre) based at the University College of London in the United Kingdom, this report is currently the most comprehensive understanding we have about what works to support the use of evidence for decisions. But because ACE is a place of people who are always interested in learning about using evidence, and always reflecting on whether we are doing it right, it became clear that science alone is not enough to support decision-makers to use evidence; there is a gap.

ACE team members continued bumping into this gap as they carried on with their work to support evidence-use in decision-making. They started seeing how the experiences and expertise that people had but that was not written down was considered invalid, irrelevant. Ruth gives an example: “Just because a team working in Cameroon doing amazing work hasn’t yet published their work, does it make it any less important?”

The underlying assumption of her point is that tacit knowledge of how work with decision-makers to use evidence is not always counted until it becomes ‘science’; it is ‘valuable’ only when it is published. 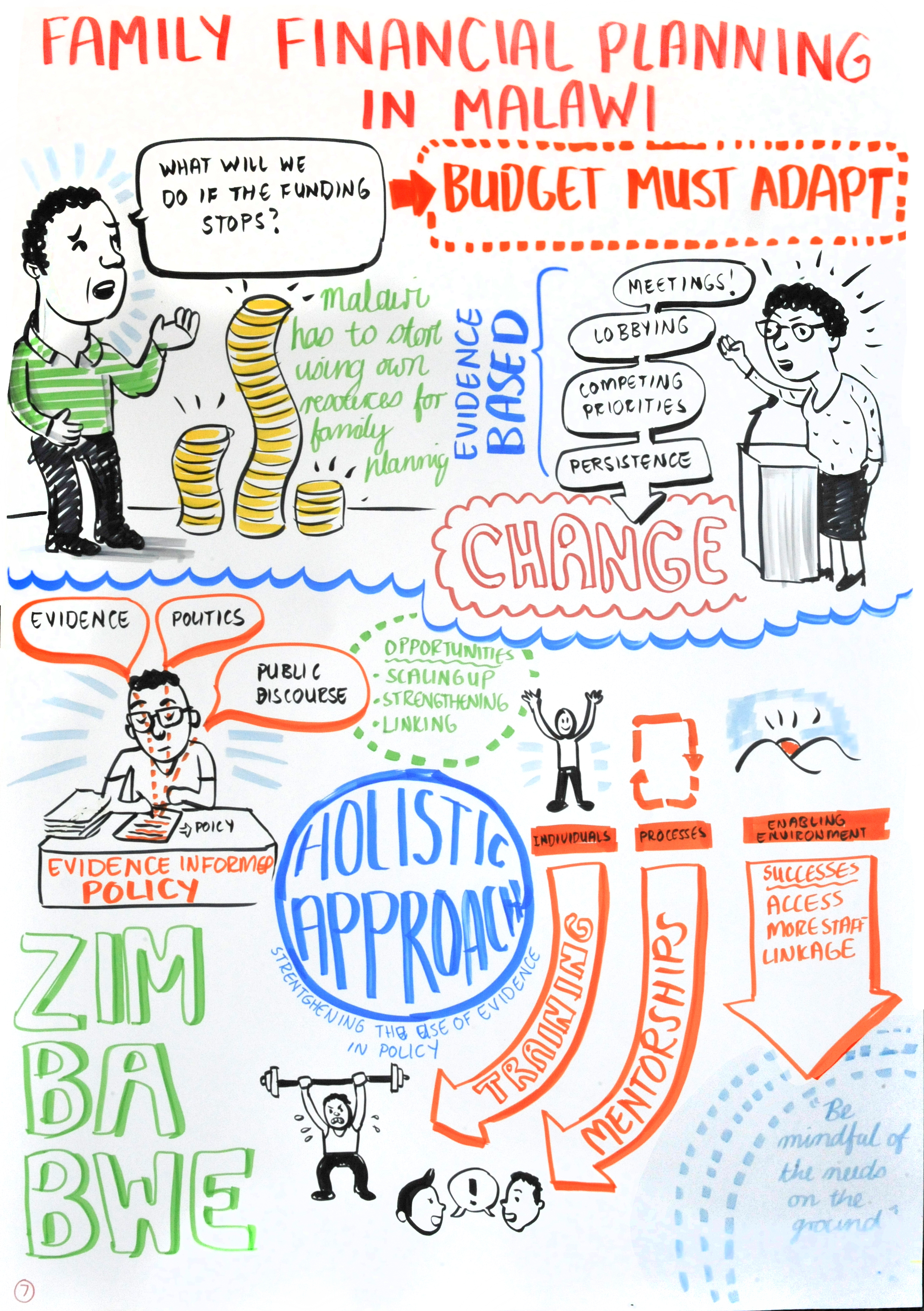 One art form useful to evidence-informed decision-making is introduced in the form of visual storytelling capturing discussions at EVIDENCE 2018.

And so ACE has this desire to learn from the experiences of people even though it might not be published literature. Multiple projects at ACE demonstrate this advocacy for the inclusion of tacit knowledge when we consider how to effectively support evidence-use for decisions. For example, we have built on the 2016 Science of Using Science report to collate both the documented art and science of evidence use in LMICs within a single evidence collection. I’m sure by now you know, dear reader, that with ACE, here is no ordinary academia right? So of course whatever knowledge about supporting evidence-use in Africa is learned and collated, ACE increasingly shares it as widely across the continent as possible so that we do not learn and only improve in our own corner. Sharing through events like the Africa Evidence Network’s EVIDENCE 2020 ONLINE event where tacit knowledge gathered by attendees over lifetimes of working in the African evidence ecosystem was gathered to complement a systematic map of scientific literature on the same topic. ACE has learned and experienced first-hand that to successfully support evidence-use by decision-makers, we need to engage with our specific contexts and colleagues as well as different types of evidence that speak to our context.

After all, we’re building something to last

So ACE thinks about this part of our work as both a drawing together of the various portfolios’ efforts, and a learning foundation to inform these efforts, to advanced our aim to alleviate poverty and inequality through the use of evidence in decision-making. The art and science of using evidence is in the way we capture what we’ve learned through the years  to reach various audiences: popular writing (such as this blog series), academic publications, events, creating learning and sharing spaces, developing our short learning programme, as well as seminars and presentations. Because ultimately this portfolio about recognising that the nest of supporting the use of evidence in decisions needs two spaces – one based on tacit knowledge and one based on science – to create something that lasts beyond ACE’s story.

In ACE, there are many overlaps between programmes and portfolios and THIS is where we find the most exciting experience and where we demonstrate how we are #ACEingIt. In our next post, you’ll read about a young person who decided to jump on a life raft and built it into a research vessel as we explore the history of ACE’s evidence synthesis work.

The views expressed in published blog posts, as well as any errors or omissions, are the sole responsibility of the author/s and do not represent the views of the Africa Centre for Evidence, its executive management, advisory or reference groups, or its funders; nor does it imply endorsement by the afore-mentioned parties.

Modise A & Tannous N. 10 September 2021. Blog post: Blending art and science to build something that lasts. Available at: https://africacentreforevidence.org/blending-art-and-science-to-build-something-that-lasts/.