Five days in Mexico: my What Works Global Summit 2019 experience 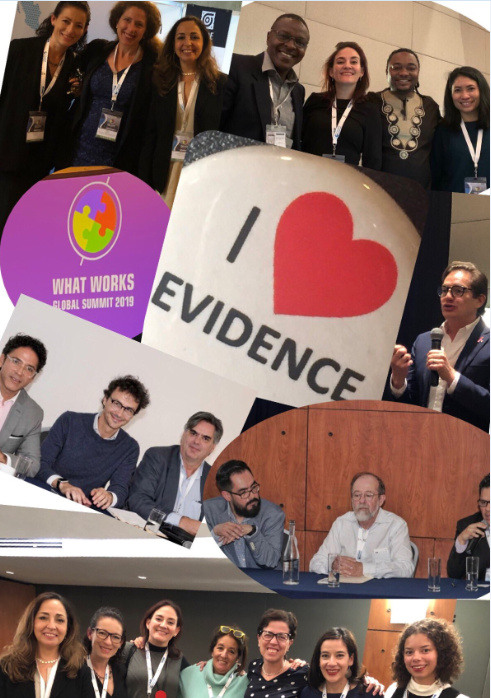 A collection of images from Twitter taken during the What Works Global Summit 2019.

It all boiled down to co-facilitating two workshops, chairing one session, giving three presentations, and attending an exclusive dinner. What a week it was! After stressful months of preparing for the trip, and enduring the nerve-wrecking feeling of going to the land of the ‘unknown’, it was all worth it for the tale of the good, the bad, and the ugly; my focus is on the former.

Day one – Saturday 12 October, I land safely in Mexico after enduring 20 hours of flying and roughly 30 hours of total travel time. Exhausted but not in despair. Nervous but highly motivated. I always cherish the moments I get to represent our organisation –the Africa Centre for Evidence (ACE) – it’s fulfilling. Having grown up on a farm in Zimbabwe and having spent most of my holidays with my dear grandmother in the rural areas herding cattle, not in my wildest dreams did I imagine that one day I would travel this far, or better yet be trusted to represent such an esteemed organisation on a global stage. And so for the one-and-half days before the start of the conference, I got to reflect on my childhood and the journeys (academic, career, and personal) that have landed me where I am. I guess growing up surrounded by poverty and despair has made me appreciate the opportunities that I have been given. The What Works Global Summit 2019 (WWGS 2019), amongst many other things, is a platform to understand poverty and inequality better and figure out ways to address this seemingly everlasting disease: I felt excited that my journey had led me here.

Day two – Monday 14 October and the conference kicks off with workshops, as per tradition in many conferences. For me, day two meant another chance to co-facilitate a session with Professor Sandy Oliver; the first opportunity was at the Africa Evidence Network’s own conference, Evidence 2018. The workshop was titled “Engaging stakeholders with evidence and uncertainty” and aimed to get participants to discuss models of stakeholder engagement and how to choose between them. Promulgated on the assumption that stakeholder engagement is a key factor for the success of evidence production (both producing evidence and using it), this workshop was a crucial contribution to an upcoming paper that explores the face validity of collated models for stakeholder engagement. The overall objective of the workshop was to share with attendees more practical guidance about choices and application of stakeholder engagement models for impact evaluation and synthesis, depending on what is known from generalisable research and what is known about specific contexts. How exciting. In sync with the essence of the overall conference, I wonder if there was any better way to get attendees to think about how they, for example, could interact and network over the next few days and beyond?

Another exciting workshop followed the next day: day three. Together with two colleagues Birte Snilstveit from the International Initiative for Impact Evaluation and Jennifer Stevenson from the Education Endowment Foundation, we co-hosted a workshop with the objective of getting attendees to work together to conduct a rapid systematic review on preventing intimate partner violence, as well as to ultimately produce a policy brief entitled “What are the effects of conditional cash transfer programmes on women’s experiences of and responses to intimate partner violence?”. This workshop and policy brief was a response to an evidence request by Colombia’s health ministry and the National Planning Department (Sinergia) as a commitment to both poverty reduction and the promotion of gender equity, including the elimination of violence against women. The workshop was the final lap of a three-part webinar series that prepared participants to engage in the workshop at WWGS 2019. Needless to say, we had Colombian government personnel in the room as part of the process; their presence proved highly useful as it enabled us to seek clarity on any ambiguities in real time from the official present at the workshop and from her colleagues in Colombia.

Still riding on the crest of this wave, then came D-day, the moment of truth: day four. It was time to showcase what is, personally, the most thrilling and fulfilling project since my exposure to the evidence-informed policy-making space: a policy-relevant evidence map on land reform in South Africa.

To give some context for why this has been my favourite projects, South African President Cyril Ramaphosa appointed an expert advisory panel on land reform to provide independent advice and a unified set of policy recommendations on land reform with respect to restitution, redistribution, including tenure reform. A technical committee was set up to support the Panel to ensure that the review process was evidence-informed. The Department of Planning Monitoring and Evaluation (DPME) research unit was requested to assist in sourcing and synthesising relevant research evidence to inform the policy review currently underway on land reform and protected areas. An evidence map (EM) was recommended by the DPME research team as the best way to visualise evidence to inform the review process, leading to the co-production of this EM on land reform by the ACE and DPME teams in the last three weeks of February 2019. Hence, it was huge moment to share our experiences with audiences at WWGS 2019, which went beyond just producing the map but also included a first-hand experience of how an evidence map is used in action to inform policy. The acknowledgement of the institution in the final report was the cherry on top for me.

Whilst we are extremely proud of what we have done with evidence maps in the South African context, it was also motivating to see how they have gained traction globally.

Finally, we reached day five, where I give the last of my two presentations on evidence maps. The first one focusses on understanding the demand for and the use of evidence in African countries. Specifically, it assesses the existing evidence on interventions supporting African decision-makers’ use of evidence, by applying and refining a conceptual framework developed by Langer and colleagues in 2016 for the Science of Using Science project. As with the land reform map, this presentation garnered a fair amount of interest from the audience at WWGS 2019 with some requests for the map coming in before the end of the presentation. The second evidence map that I present on day five is work largely driven by our colleagues from the Collaboration for Environmental Evidence South Africa Centre (CEE Joburg), in partnership with Mapula Tshangela from the Department of Environment, Forestry and Fisheries (DEFF) as well as Harsha Dayal from DPME. This again is an opportunity to focus on the strength of evidence maps in our work with South African government departments. One major highlight was the evolution from an evidence request to rapidly respond on the state of land degradation within one South African province that fed into a provincial evidence strategy, to piloting a responsive evidence synthesis service for and with DEFF. Keep a keen eye out for more on this project!

Pardon my bias here based on the above, but what was perhaps the most exciting part of the conference content was that there were a number of presentations and discussions around evidence mapping. Whilst we are extremely proud of what we have done with evidence maps in the South African context, it was also motivating to see how they have gained traction globally. The response from the audiences in my presentations was inspiring to say the least and got me more excited about our efforts to build, strengthen, and sustain EMs for rapid response services.

To top this all was the Hewlett reception dinner. Food, yay (my reputation precedes me when it comes to food). Although – and sorry to disappoint my ACE colleagues here – I enjoyed the food, it was not the best part of that evening. In this gathering of esteemed leaders, what an honour it was to meet one-on-one with Dana Hovig, Hewlett’s new Global Development and Population Program director. His commitment towards partnerships (which I have no doubt is in tandem with Hewlett as an organisation) was quite clear on this occasion as he went out of his way to engage with all of us individually, despite being time constrained. And it’s not everyday that one gets to be in the same room as some of your role models and fellow economists. For me, this was Santiago Levy, dubbed the main architect of “Progresa-Oportunidades” — Mexico’s incentive-based health, nutrition, and education programme for the poor, as well as Anette Brown. Overall, this reception dinner was a pleasant platform to engage with likeminded people in stimulating conversations, all of whom are striving towards the collective goal of better evidence use. Sharing their experiences with,and providing some advice to, me was a point of awakening for me career-wise.

The experience of the WWGS 2019 was truly humbling, enjoyable, and motivating. Taking this journey to that land of the ‘unknown’ (and perhaps travelling for almost 60 hours in less than a week) gave me much time to reflect. I reflected on all the journeys that have brought me to this point in my life. Had you asked that young man herding cattle on a farm in rural Zimbabwe whether he’d imagine himself spending five days in Mexico with people from all over the world who have committed their lives to reducing poverty and inequality through the use of research evidence, he probably would’ve laughed. And yet, here we are. So, remember remember: five days in Mexico.