By Aziza Modise with support from Natalie Tannous

This blog post is part of a series on the history and development of the Africa Centre for Evidence (ACE) that draws on two research projects from 2020. These research projects captured stakeholders’ perceptions and experiences of ACE’s contribution to EIDM. Drawing on interviews among ACE staff (previous and current), members of the AEN, and our partners, the stories captured in this series paint a rich picture of ACE’s contribution to the African and South African EIDM space. We aim to publish a new post on the tenth of every month. View the whole series here.

One of ACE’s fun team meetings heart-warmed by Aziza

Throughout these blog posts, it should be evident that love, passion, and dare I say talent for working in the evidence ecosystem has been an excellent propeller for the Africa Centre for Evidence (ACE) team in doing their work. Accompanying these are core values, not least of which are foregrounding people and creating an enabling environment to ensure that those around them can do their best. As the years have gone by, it became clear to our pioneers that this emphasis on people and focus on values is one of ACE’s strengths. This blog post will try to do justice to this influential idea of foregrounding capacities, which (I feel) is about to take off in unique ways as part of the incredible story of ACE. So, I want to start this leg of our journey with a short story of someone who encompasses how individual growth happens at ACE. I then give you a glimpse of how ACE shares capacities with her partners. And we end with where our journey is taking us with this vehicle I like to think of as “evidence capacities in us and our communities” and what ACE simply calls “evidence capacities”.

The Africa Evidence Network (AEN) programme officer Charity Chisoro is proud of the role she plays within the ACE communities portfolio and at the AEN secretariat as the lead for the workstream on “enhancing evidence capacities”. Her exposure to evidence-informed decision-making (EIDM) actually started in 2016 during the AEN biennial event in Pretoria – EVIDENCE 2016 – where she was responsible for assisting with online engagements and other administrative requirements as an honours graduate from the University of Johannesburg. Charity had always had a passion for making a difference and having a positive effect in society through alleviating poverty; working at EVIDENCE 2016 gave expression to this passion of hers. As she unreservedly jumped into her role with both feet, her passion was so apparent that ACE couldn’t let her go.

“I learnt a lot as I was working as a researcher about the importance of using evidence in decision-making. What particularly stood out for me was the concept of co-production, where researchers work together with policy-makers to come up with inclusive decisions for policy which can be implemented easily, as they will be informed by the best available evidence”.

Moving on from the research team, Charity worked with the communications team towards the end of 2018; read her reflections as a social media ‘star’ here. The late Nelson Mandela once said that “after climbing a great hill, one only finds that there are many more hills to climb”. This saying resonates strongly with Charity’s EIDM capacity journey: as she’s scaled one hill, she’s encountered another to scale as she progresses in her career.

From 2020, Charity has been working as a programme officer for the AEN delivering the ‘enhancing evidence capacities’ workstream. In this role, she is responsible for a number of activities which aim to enhance the evidence capacities in the EIDM sector in Africa, such as advancing the Manifesto on capacity development for EIDM in Africa as a tool of collaboration. Having contributed to this body of work for over a year and a half, Charity decided to pursue her PhD in development studies on a topic related to EIDM and her role at ACE.

“I’m really excited about this journey since this will be a great way for me to achieve my goal of contributing to the alleviation of poverty through the use of evidence in decision-making,”

Her research aims to explore several ways in which communities of practice can be used as an effective tool to enhance evidence capacities in the EIDM field in Africa. What makes Charity’s story more impressive is that hers is not the only one at ACE like it. I could tell a similar story about any of the portfolio leads – and many staff (including myself) – that demonstrates how organically each of us grew in not only our work roles (which may not be so strange) or even in our personal lives (again, maybe not so unexpected) but also in our academic lives. This three-pronged growth is so organic as to be imperceptible and it happens to all of ACE’s team members. Am I saying it only happens at ACE? No dear reader I am not. But I will fill ten pages if I continue to break down how ACE does it. Suffice to say for now I am regrettably unable to tell you all the stories like these that I know. And I have a sense there are many more stories of enhanced capacities that I have not had the opportunity to hear. Ah, the anguish of virtual working: you can bet I would have squeezed all staff for their secrets by now had we been working in-person 🤣😂😅. But on a serious note, this is one of ACE’s strengths as an organisation:

to be able to come along a student, awaken their passion in wanting to make a difference, develop a trusting relationship, and then connect them to appropriate communities where they can thrive. 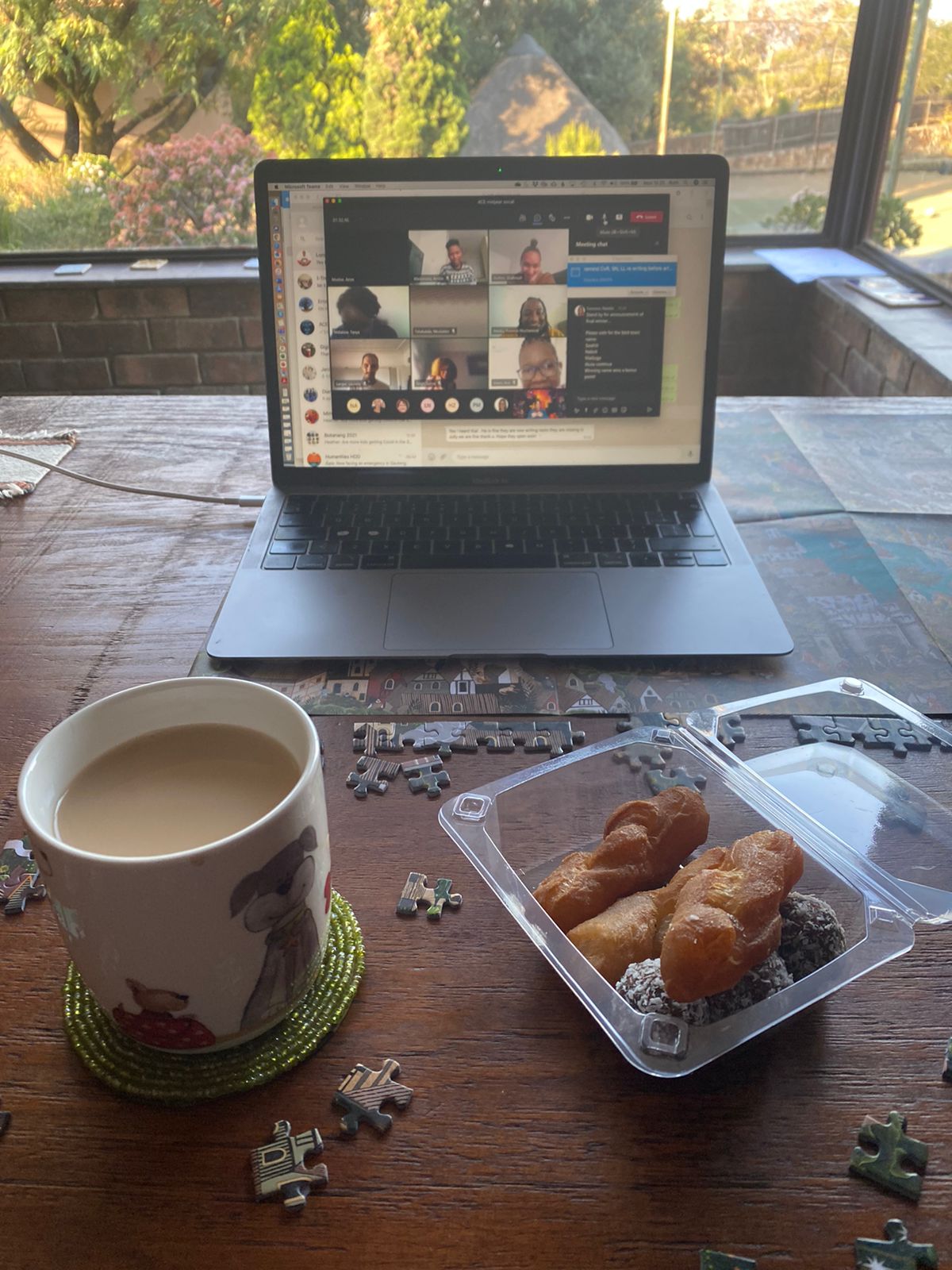 In listening to ACE staff narrate their histories and experiences in the evidence ecosystem I realise that the concept of “capacity-sharing” has been long in the making, like other parts of our history. It began around six years ago during the University of Johannesburg-led Building Capacity to Use Research Evidence programme (UJ-BCURE). As a reminder, UJ-BCURE was working to build capacity to use research evidence.

Apart from UJ-BCURE and another team from Malawi and Kenya, the rest of the projects commissioned by DFID under this programme were Northern-led. A general assumption of a deficit model of capacity development is that organisations in the South need their evidence capacities built because they lack the appropriate capacity to engage in EIDM. This did not sit well with those who would eventually become the ACE team. Doing this project confirmed the two budding pushbacks: first, the assumption that organisation in the global north were necessary to teach organisation in the global south how to do EIDM, and second, the assumption that decision-makers would need to learn about research from researchers to engage in EIDM.

The then-programme director Ruth quickly realised that were the UJ-BCURE work to be successful with government colleagues, a relationship built of trust and respect would be non-negotiable and this relationship could not blossom in the assumption that expertise in engaging research lies within researchers.  Ruth describes this realisation: “It’s something I had always thought was the case and it became important to think it through in practical ways. Now that we were arriving at government officials’ offices, inviting them to workshops, needing to engage immediately with this question of who is building whose capacity, and why would we be so arrogant as to assume that they needed to learn about research when many of them were already experienced researchers.

In fact, our knowledge about government was very pathetic and we had lots to learn, and not least myself, so we thought about how to change our language and we started to shift within that programme [UJ-BCURE]”

This realisation, borne many years ago when Ruth and her team had to think and learn about how to adjust their own thinking and language about capacity development, was the foundation of the idea of capacity-sharing. The more the ACE team got involved with different partners and building relationships, the more they realised how capacity development was positioned was all wrong. It was and is not ‘capacity-building’ that happens in the EIDM ecosystem in Africa. Instead, colleagues and partners collaborate and think through many issues together: it is capacity-sharing that takes place. Ruth remembers the formation of this idea, saying, “The more we worked together, the more we realised that ‘capacity-sharing’ was more appropriate to describe what was happening in the UJ-BCURE programme…when we came to think about the name of one of our portfolios in ACE, we named it ‘evidence capacities’…because we look at capacity development as a process that can include all sorts of people”.

Capacity-sharing means that as ACE team members, we learn from – and innovate with – our partners through collaboration to produce better synthesised evidence, better evidence maps, better research, better communities, better ways to further enhance capacities, and better products that are useful and used for decision-making.

When it comes to partners, the focus of the evidence capacities portfolios at ACE is threefold. Lead Carina says “We need to think of the individual, …of the organisation, and…the systems. There are different focuses, different interventions and different mechanisms that will be context-specific. So, if I need to think about capacity-sharing with an organisation, then I also need to think about where this organisation fits in the evidence ecosystem”. But of course, working in communities also must mean going forward with our partners without shoving our ideas down their throats. That is what Ruth means, I think, when she says,

“Where appropriate …and where it will help to build relationships and trust, we talk about capacity-sharing so to ensure that everyone is learning from each other”.

You’ve heard the story of how growing at an individual level is vital for ACE, how it will be encouraged and supported, and how it happens almost organically. You’ve heard where our thinking comes from when it comes to growth at an organisation level. Now let me tell you about a journey ACE is planning for the near-future and the possibilities going forward. The University of Johannesburg has given approval for ACE to venture into a new sharing space. We will be sharing capacities in a short learning programme on EIDM that will turn learning on its head 💃🏽💃🏽💃🏽. With my mind’s eye I see you frown, confused: ACE is part of a university, so what could possibly be so exciting about yet another course provided by UJ? Let me satisfy your curiosity a bit by whispering this yet-to-be-shared secret in your virtual ear.

Have you noted the word ‘learning’? That is because the emphasis is not on teaching, nor will it ever be on ‘the student’. At least not in a conventional way that teaching and student-ing happens.

Our mavericks have convinced the University to allow us to do learning in a social way, in a way that there is no teacher and there is no student, in a respectful way, in a way that everybody in the course is a partner and a collaborator. It will be yet another steep learning `hill` for our trailblazing ACErs as we learn with partners how to learn together as novices and experts in EIDM, PhDs and honours graduates, French- and English-speakers, interns and directors: all in one course and making meaning together of EIDM. It’s going to be an epic – and worthwhile – hill to climb.

I hope that more and more you have a better picture of the work ACE does and, more than that, why we do what we do. The next blog post will take us more into the think tank that is ACE as we talk about how ACE explores the art and science of EIDM in Africa. Coming up – what does art have to do with evidence and how is science involved? All will be explained as we continue on our journey of #ACEingit!