Evidence animals, evidence maps, and rapid response services: a reflection on discussing different mechanisms for evidence use in South Africa 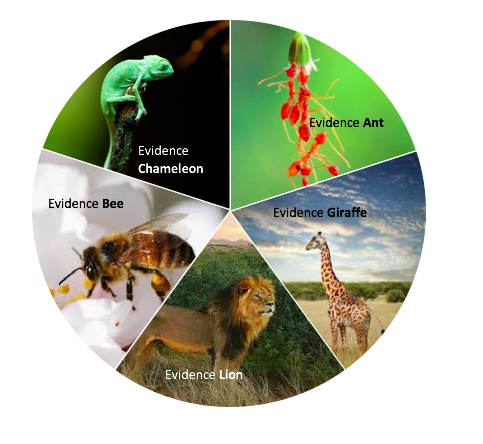 On 1st August, the Department of Planning, Monitoring and Evaluation (DPME) in South Africa hosted a 1-day event* to discuss mechanisms to support the use of evidence. Supported by the Africa Evidence Network, the Department brought together over 50 government decision-makers from nine departments including the Department of Public Service and Administration, Department of Cooperative Governance, and the Department of Science and Technology. This group of decision-makers were targeted given their existing engagement in efforts to increase the use of evidence in their various Departments. In particular, most of them had been involved, or expressed interest in, DPME’s programme of conducting policy-relevant evidence maps. Having conducted four evidence maps in strategic policy areas, the event was a chance to reflect on the usefulness and application of DPME’s evidence maps and to explore how the maps—as one mechanism to support evidence use—could be embedded as a knowledge management tool into government decision-making systems.

The event was chaired by Carina van Rooyen, the Director of the Johannesburg Centre for Environmental Evidence (CEE Joburg), an organisation supporting the use of environmental evidence in South Africa. She requested participants to think of an animal they associate with evidence use. This exercise immediately highlighted the inherently complex and political nature of supporting the use of evidence in the public sector.  Here are some highlights from the evidence jungle that was let loose by the participants:

There were certainly common themes in the evidence jungle. Evolution seemed to favour animals that relied on groups and interactions among each other; displayed strong leadership and resilience; were able to see past current priorities and needs; approached issues in a consistent and routine process; and had strong analytical abilities.

From this lovely detour into the evidence jungle, Harsha Dayal from the DPME then brought the participants back into the reality of trying to support the use of evidence in South Africa. Her presentation outlined DPME’s programme of policy-relevant evidence maps. DPME’s evidence maps have been applied in four strategic policy areas: human settlements, spatial transformation, the developmental state, and early grade mathematics. In each policy area, the maps took a different research approach and found different applications to inform decision-making. These diverse applications include among other: the highlighting of evidence gaps for key policy directions, providing the basis for evidence-based rapid responses to decision-makers’ request for information, and the setting of research agenda. Harsha concluded how the maps have been transformed from initially a research methodology into a knowledge management tool to facilitate the systematic sourcing and organisation of evidence-bases that are responsive to policy-makers’ needs and priorities.

However, evidence maps only get you so far in informing policy and decision-making. A key issue with evidence maps is that they are largely descriptive and require additional analysis to answer normative policy questions (eg, what works, how and why). Here, Harsha already hinted that DPME is using the maps to inform rapid responses to policy-makers’ requests. This application of the evidence maps as a source for rapid reviews and synthesis to answer normative policy questions shows huge potential but has not been formalised yet. To address this question of formalisation, the AEN had invited Rhona Mijumbi, the mother of Rapid Response Services in Africa, to present on her work of setting up rapid response units across Africa.

In her presentation, Rhona reflected on her almost 10 years of experience in setting up organisational structures and developing research methodologies to conducting rapid responses to inform policy-makers in Africa. She defined Rapid Response Services (RRSs) as a form of knowledge translation set up to avail already synthesised evidence to facilitate decision-makers in passing quick and or urgent decisions of policy relevance. Key characterises of RRSs thus include (1) the provision of the best available evidence (both, in terms of quantity and quality), (2) at a time when this evidence is needed, (3) in a direct response to an urgent decision-making need, (4) in a manner that contextualised the evidence to decision-makers’ priorities, and (5) packing and presenting the evidence as accessible as possible (eg format, language). Rhona went into great detail showing the use of her REACH model to RRS in Uganda. The audience learned about how her team provided responses to direct policy formulation, even up to providing responses to questions requested by the country’s president!

Following these rich and in-depth presentations on evidence maps and rapid response services, Ruth Stewart the Director of the Africa Centre for Evidence then facilitated a lively conversation on the relevance of both mechanisms for evidence use to decision-makers in South Africa. There was a sense of excitement in the room and the prospect of potentially marrying DPME’s policy-relevant evidence maps with Rhona’s model for RRS had participants talking way into the lunch slot!

*This event was part of a larger 3-day learning exchange on evidence mapping and rapid response services organised by the AEN. In a previous blog, Zafeer Ravat reflected on the public lecture part of this learning exchange and in a future blog Harsha, Rhona, and Laurenz will reflect on the overall outcome of the 3-day event.