Land Reform in South Africa: What role does evidence play in righting a historical wrong?

Few policy issues in South Africa are as controversial and emotive as the issue of land reform. This was particularly so in the months leading up to the 2019 South African national elections. The expropriation of land without compensation became one of the key election promises of some parties with others fiercely rejecting it. With the issue often a proxy for opposing ideological positions, land reform is a challenging area for evidence-based policy-making: what do evidence and data have to offer when faced with a century-old structural injustice, with an open national wound that continues to undermine social cohesion and reconciliation? In March this year, our team at the Africa Centre for Evidence (ACE) had the privilege of looking into this question when we responded positively to partner with the Department of Planning, Monitoring and Evaluation’s (DPME) research unit, in providing technical support to the Presidential Advisory Panel on Land Reform and Agriculture.

A political decision: but then what?

Evidence is no substitute for political decision-making, but it is a player in the policy arena. And what a crowded arena that is for land reform: interest and lobby groups attempt to shape policy direction, party resolutions determine policy approaches, media and civil society have influence—to name but a few. Against this background, the incoming administration took a political decision to define a new policy on land reform and review existing instruments. An expert advisory panel representing a broad range of policy actors with diverse policy perspectives was constituted. The panel was made up of 10 exceptional members who were selected on the basis of their academic backgrounds on, experience and entrepreneurship in, or activism regarding the agricultural economy and land policy in South Africa. With this political decision, a range of perspectives were invited into the policy arena: but what about the evidence on land reform?

Land reform is a policy issue that will require government’s continued leadership and management. It is thus not a once-off policy decision but an ongoing policy project including policy (re)design and implementation, monitoring, and iteration. Consequently, government has an ongoing need for relevant data and evidence to guide its continued decision-making concerning land reform. It therefore seemed an opportune moment to take stock of the available knowledge in South Africa on land reform. This evidence request was received by the research unit within DPME, who has collated such policy-relevant evidence-bases in different policy sectors before. And, as this was a  request for evidence support within an extremely short turnaround time—to be concluded in a mere four weeks—the DPME research unit reached out to us at ACE to co-produce the responsive evidence-base to timeously address the evidence needs of the technical team supporting the panel.

What followed was an intense four weeks of co-producing the policy-relevant evidence-base between DPME and ACE’s research teams. Seven researchers worked on this map pretty much full-time and in the end, sourced, extracted, and organised a total of 318 studies according to the panel’s evidence needs. This body of evidence was visualised and made accessible through ACE’s interactive evidence mapping software (see below). In short, the map aimed to give the evidence-base a voice in the current and future policy-making process. As expressed by the panel itself:

“The database and the evidence map developed through this collaboration is a legacy that the panel hopes that government will use effectively in the future”. 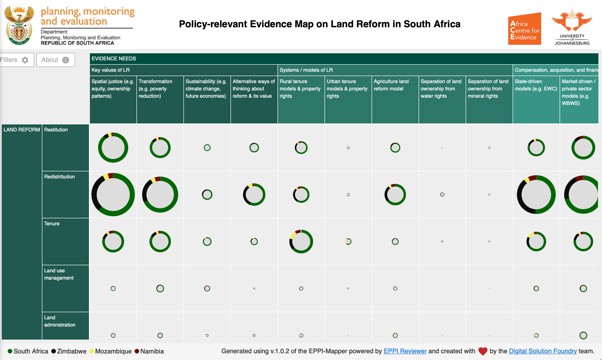 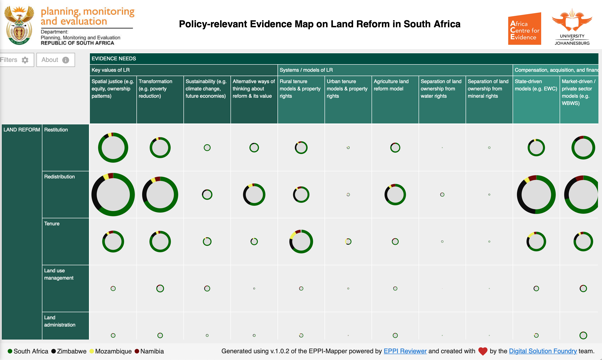 Whatever the outcome, evidence was involved

So where does this leave us? Did evidence come to the rescue of land reform? What effect does collating the evidence-base have on the policy direction?

Not so fast. Evidence cannot trump emotions and politics. Evidence should not dictate decision-making processes in a democracy. It’s much more nuanced than that.

At the time of the announcement of President Ramaphosa’s Advisory Panel, we watched as citizens, and it did not cross our minds that as an evidence synthesis team we might be called to support the panel and policy process. For many researchers, it’s a dream to see their evidence being used and make a real difference in society.  And so it was an honour to participate directly in sourcing and synthesising evidence to inform policy-making in our country.

Whatever the outcome of the panel, whatever recommendations they make to the President, the process of making this immense decision for our country included consulting all the relevant, high-quality evidence on land reform from countries comparable to South Africa. For us, this in itself was a dream made real.

Now that the report from the advisory panel on land reform is published, the arguments both for and against land reform resume. Neither the combined opinions of 10 eminent experts nor the combined results of 318 studies will silence this debate and provide an uncontested ‘solution’. Such is the process of policy-making and public debate in a vibrant democracy.

Still, as researchers in our corner of South Africa, we are proud to have been involved in systematically collating the evidence-base to inform the report that was submitted to the President. Whatever decision is made, the evidence was there in the policy arena. In our opinion this is yet another example that cements South Africa as a world leader in evidence-informed policy-making.