I met Ruth Stewart when I took a job as a half-day administrator at one of the University of Johannesburg’s research centres, where Ruth was then a research fellow. As a young person getting her first taste of the working world, much of it was intimidating for me. That is why meeting Ruth was such a balm: she was unassuming, warm, and kind. One memory of mine that illustrates this was when I was charged with creating her email address. Before asking Ruth what combination of first and last name she’d prefer, I happily organised an email address that saw her being pluralised: Ruth became a RuthS. Where most research fellows would have chastised this pluralisation of their professional calling cards by overly enthusiastic junior staff, Ruth smiled, shrugged, and has been a RuthS ever since. It has been an honour and inspiration to witness a person of Ruth’s high-quality character rise in her career. Now as a Professor, she celebrates yet another achievement: receiving a B1 National Research Foundation rating.

Ruth was awarded a B1 rating from the South African National Research Foundation (NRF). The NRF is a South African government-mandated research and science development agency. It functions to fund research, develop capacity to undertake research, and supports the research infrastructure critical to promoting knowledge production across all disciplinary fields. The NRF aims to transform the South African scientific landscape and inspire the research community to compete at a global standard.

The NRF rating system is one way the Foundation aims to drive that competition; it aims to rate South African researchers against others in the world based on the quality and impact of their research outputs over the past eight years. The process considers the evaluation of researchers by local and international peers, and acknowledges researchers that are counted by leaders within their field that consistently produce high-quality research outputs.

Ruth has worked in the field of evidence-informed decision-making for over 20 years. The highlights of her career thus far have been leading one of six in the world Building Capacity to Use Research Evidence projects, funded by the UK Department for International Development. The successful completion of this three-year project led to the birth of the Africa Centre for Evidence at the University of Johannesburg, where Ruth took up the mantle of leading the then six-person team to grow – a mere two years later – into a young organisation of twenty individuals.

During this time, she also convened the Africa Evidence Network, which has grown to include a membership of almost three thousand individuals with an interest in the production and use of evidence for poverty reduction in Africa. Ruth has consistently published and spoken about why she believes that research evidence – and particularly evidence syntheses – can change the world for the better, co-authoring with partners and colleagues on everything from how to change the world with systematic reviews and the role of relationships in evidence-informed decision-making to better understanding the evidence ecosystem in South Africa. Her message is defiant – she challenges traditional ideas some of her contemporaries may have about how development does and should work.

On a mission to make a difference 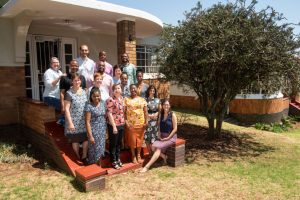 Professor Ruth Stewart (third row, far left) and the team of the Africa Centre for Evidence in 2019.

Another element of Ruth’s mission to include evidence-informed decision-making in poverty reduction is by advancing the methodological work in the field. In a 2014 paper Ruth positions evidence synthesis – such as systematic reviews – as useful tools to ‘change the world’. “So much has advanced since I published that paper and I would love capture all those exciting developments in an update of that paper”, Ruth says. “Our evidence synthesis team at the Africa Centre for Evidence has been part of incredible partnerships that have allowed them to adapt traditional systematic review methods in the co-creation of evidence syntheses with government colleagues and the provision of rapid evidence response services in different development sectors.” Ruth sees this advancement as contributing to the challenging of assumptions about what constitutes scientific rigour in an applied international field.

“I truly believe in the power of collaboration,” Ruth says as she explains another element of her mission. She continues: “My networks extend internationally, with a number of key partnerships between my research centre at the University of Johannesburg and other universities including Makerere University, University College London and McMaster University in Canada. It is our vision to design and offer a joint Master’s programme on evidence-informed development”. 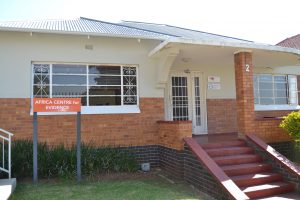 One of two houses out of which the Africa Centre for Evidence operates, based at the Bunting road campus of the University of Johannesburg in South Africa.

Now rated, what next?

“I am right at the coalface of the amazing work happening in Africa to support evidence-informed decision-making for development, and this NRF rating is a real recognition of that,” Ruth says. When I ask how she sees the NRF rating being used to support her research vision and mission, she already has the answer. “I would love to form a new NRF-Department of Science and Technology (DST) Centre of Excellence in Evidence-Informed Decision-Making. I think getting this rating is a step towards continuing to make a sustainable home for greater capacity-development and research in evidence-informed decision-making to take place. Some of the activities I’ve mentioned here would be strengthened and enhanced if they could be ‘housed’ with an NRF-DST Centre of Excellence.”

Ruth’s NRF rating is an acknowledgement by leaders within South African academic community of the strides she has already made in bringing her vision to life. And in her unique way, Ruth is an example to us all that strength doesn’t have to be loud, excellence doesn’t have to be boastful, and power never needs to be unkind; great success awaits those of us who know when to smile, shrug, and accept the pluralisation of our names for the sake of working together.