Networks Series 5: Capacity-sharing to support the use of evidence in decision-making 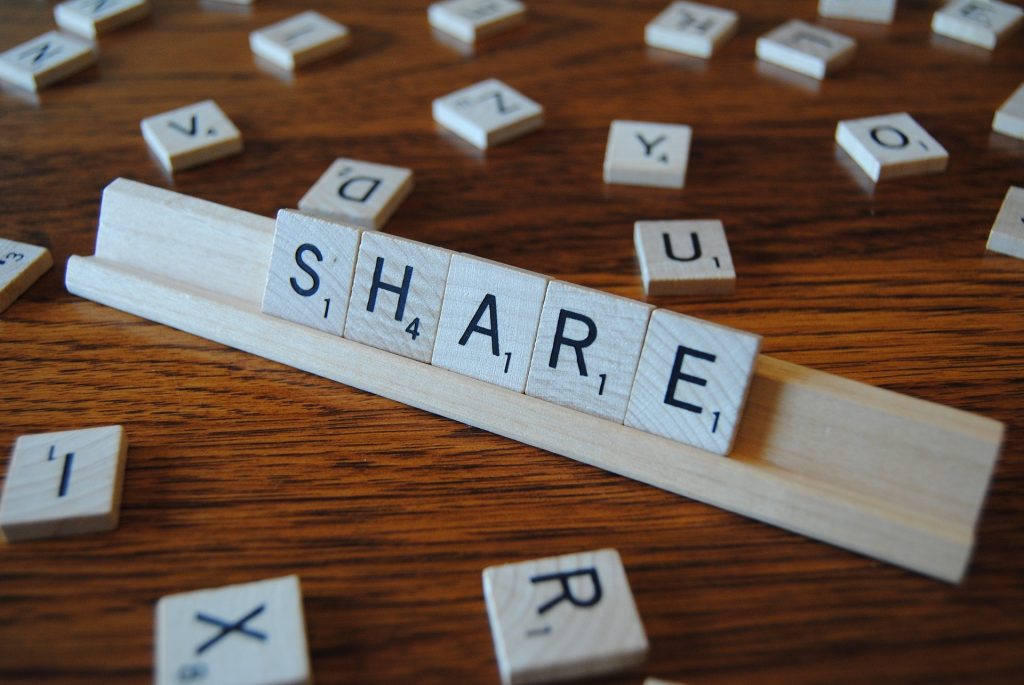 ‘She would take over the school given half a chance.’ That is what my school report said when I was six years old. I believed at that young age that I had something to contribute and was more than just the recipient of my teachers’ lessons. I must have been a nightmare to teach. Some years later when my family moved from Malawi to England, people used to ask my parents how we coped in our new school – the assumption was that English schooling was more advanced: the reality was that we were ahead of our English classmates by 6-12 months. When I was 19 I worked as a volunteer, teaching English to children from poor backgrounds in rural Borneo. I thought I had something to offer. Some of the children already spoke five languages. Five! The first time I facilitated workshops on evidence-informed decision-making, I was almost certainly the least experienced person in the room with regards research and decision-making. I was certainly the youngest.

Over and over again I have experienced contradictions in education, training and capacity-building. These included assumptions that learners are passive recipients, that poor countries are ‘behind’ wealthy ones in all respects, that skills training is always welcomed even without the award of a qualification, that decision-makers have something to learn from researchers but nothing to teach them. These contradictions have led me to reconsider how I approach ‘capacity-building for evidence-informed decision-making’. I hope my reflections might encourage you reconsider too. 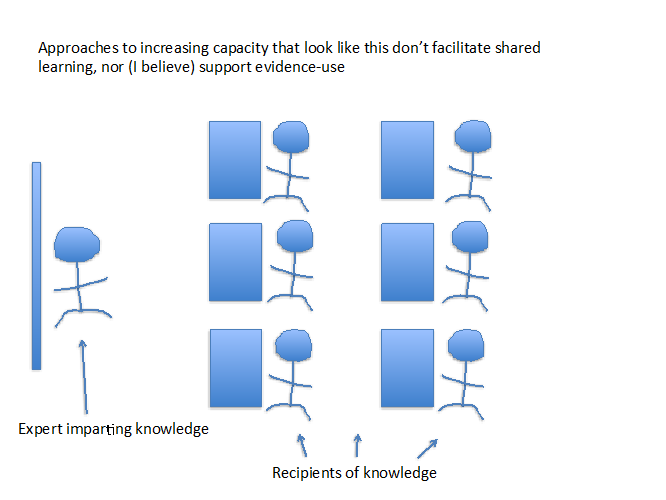 Sometimes workshop formats and more inclusive seating is used, but the model is still essentially the same. Someone is there to teach others, and those others are there to listen and learn. I believe it’s time for these deficit models to be thrown out. 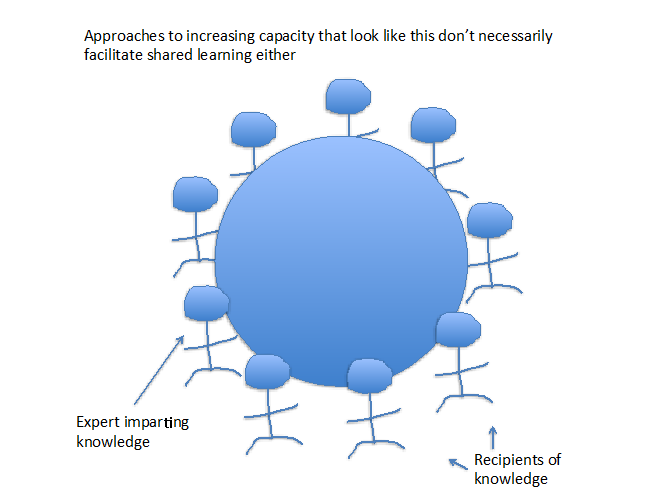 It should not come as a surprise therefore, that the term ‘capacity-building’ in relation to evidence-informed decision-making generally refers to researchers ‘building’ the capacity of decision-makers so they can increase their use of evidence in decision-making. I think this is too simplistic and one-directional, elevating the importance of research producers and what they know and missing the point that in order for the evidence ecosystem in which we operate to work effectively, we all need to learn from one another. My vote is for capacity-sharing. 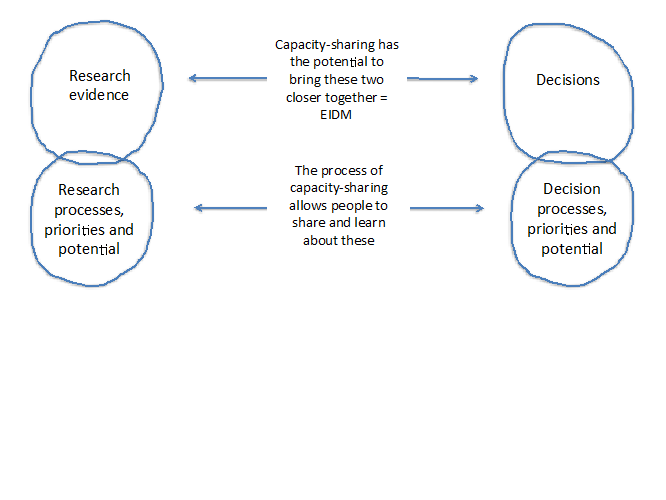 I recognise that in order to be able to produce and make sense of research evidence, you need some technical skills (particularly if you’re producing research). With regards making sense of others’ research, these skills might be in searching online databases to access evidence, they might be in doing statistical tests to analyse available numerical data, or in having the methodological training to critically appraise the potential for bias in someone-else’s analysis. But there are also plenty of technical skills around programme planning and policy-development that might benefit researchers who wish to influence decision-making. Teaching technical skills in any sphere does require some form of ‘training’ and can certainly involve an expert imparting their knowledge and experience largely in one-direction to their audience. It is not the existence of this technical training that I’m critiquing here. But I do question who sets the agendas for this training, and why it always seems to be one directional with researchers teaching decision-makers. I have had the privilege of joining discussions recently about who sets the agendas for capacity-building for evidence production. Amongst other things, we’ve been questioning whose agendas are reflected in capacity-building and what impact this has on the nature of the capacity-building that is delivered. For those of you attending the Global Evidence Summit in Cape Town in a few weeks’ time, these questions will be unpacked in more detail in a Satellite Session.

Moving beyond technical training, whilst still small, there are activities to increase the capacity of decision-makers to use evidence that are usually less technical. I ran one such programme until recently, funded by the UK’s Department for International Development and known as UJ-BCURE (the University of Johannesburg-led programme to Build Capacity to Use Research Evidence). However, what my colleagues and I experienced when we set up workshops for decision-makers in government departments was a fair amount of push back. We were questioned as to our motivations (particularly as we were funded by a foreign government). We were challenged as to what we knew about policy and decision-making. And the most vehement responses came when we, and others working on similar initiatives, spoke of ‘toolkits’. Some of our government colleagues expressed a mixture of disbelief and objection when a ‘toolkit’ was shared that had been developed in the UK. We all learnt very quickly to listen and learn from our public servant colleagues, to first work on building trust and respect amongst us all, and then to share our various capacities with one another.

In this process, we questioned the assumptions we were making about who had useful knowledge, about deficit models, and about power. We unpacked the language that we used and the approaches that we employed.[1] Whilst it is still a term we are testing out, I have realised that I feel more comfortable with the term capacity-sharing than capacity-building.[2] I want to reflect more clearly that all those involved have something to share and things to learn. I want to break down the power imbalances inherent in more traditional training approaches. I want to recognise that if decisions are to be more informed by evidence then knowledge production needs to be rethought just as much as decision-making. We all have something to learn.

The more I unpack initiatives to support evidence-use, the more I am convinced about the centrality of relationships. In my previous blog, I talked about the importance of researchers and decision-makers getting to know one another, and each other’s processes, priorities and potential. Here, in considering capacity-building, I’m drawn to models based on building trust and sharing knowledge. Please note that when I talk about ‘relationships’, I don’t just mean with people who are similar to me. I’m not suggesting that we should invest in building links and sharing knowledge with the people who are like us. Indeed, in my experience, when I have made an effort to build relationships with people who are different, who criticise me and my work, and who bring a different perspective, it is often then that I learn the most.

I am sure that relationship-centred approaches are key to supporting evidence-use. And by this I mean approaches that build trust across traditional boundaries, that build links between research producers and decision-makers, that are more than just strengthening existing relationships with people-we-like and with people-who-are-just-like-us, and that developed shared knowledge and capacity are key to increasing the use of evidence in decision-making. In relation to approaches to increasing capacity, this means capacity-sharing.

[2] I must acknowledge that we were not the first BCURE programme to question the language used with regards capacity. The consortium led by AFIDEP working in Malawi and Kenya renamed their programme from the outset to ‘Strengthening Capacity to Use Research Evidence’ (SECURE Health)